In attempting to head off a Bernie Madoff moment, China has set the stage for an even deeper bond market rout. 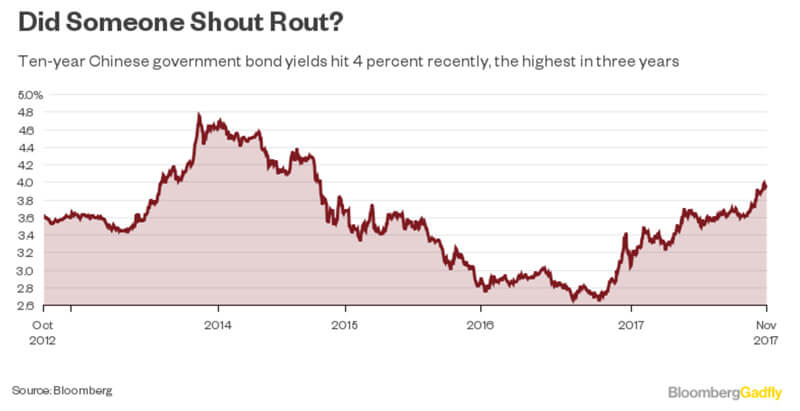 Caving into social pressure, banks in China have been bailing out wealth-management products (WMP) that have gone bad. That is not going to be allowed come June 2019. If an offering defaults, issuers or manager cannot use their own funds to prop it up or roll the product over into a new one. Those found violating the new conditions will be fined.

There will also be big changes to the types of debt offerings WMPs themselves can invest in.

Beijing has deemed that interest rates paid by WMPs are too high. Many are short term — only 7% have a maturity longer than one year, according to CICC Research — and most yield around 4% to 5%.

To ensure those juicy returns on the front end, asset managers have had to move ever further up the yield curve on the back end, buying higher-risk, longer-term securities. As a result, more than 15% of banks’ WMP funds are in so-called “non-standard debt products,” which have tenure of up to three years.

Under the new rules, any WMPs that invest in non-standard debt, like debt-for-equity swaps that are less liquid than stocks or bonds, must have at least the same maturity as the underlying obligation. In addition, only funds raised via private placements can invest in non-standard debt; funds sold to the general public are restricted to buying liquid instruments, such as shares or debentures.

These broad changes come at a sensitive time, and raise the question of whether companies in China can cope with the dual challenge of rising interest rates and tighter liquidity.

China’s wealth-management industry may be fraught with moral hazard but it is a key source of funding for the private sector, especially when firms find themselves cut off from regular financing channels such as bank loans. WMP proceeds have funded many a property project, which helps explain why shares of China Vanke Co tumbled as much as 4% in Hong Kong on Monday.

Dandong Port Group Co, which manages China’s largest trading harbour with North Korea, defaulted on a 1 billion yuan (RM620 billion) bond that matured last month even though it is a profitable company with 15% operating margins. It just could not refinance fast enough.

The yield on government debt due in a decade stabilised at 3.96% on Monday, but that is probably the calm before the storm. China’s debt market lacks proper credit ratings and is best described as a large sausage stuffed with good and bad meat. Of the some 1,500 notes of publicly traded companies covered by the nation’s four main credit-rating firms, 70% are scored AA or above, and 60% are AAA. As recently as June, Dandong Port was at a respectable AA.

As Bloomberg has noted, China is unlikely to want benchmark yields to spike much higher. But here is the problem with bonds: often bought with leverage, they can sell off quickly when risk aversion grips. What is more, asset managers will have to list their WMPs at market value rather than at cost, meaning any bond-market correction could snowball into worse much faster.