The Securities and Futures Commission (SFC) published its annual report for 2017-2018 today. It showed the regulator received a record number of complaints from investors on the Stock Exchange of Hong Kong Limited and the Hong Kong Futures Exchange limited in regards to market misconduct, scams, and unlicensed activities.

According to the report, the SFC received 186 complaints regarding scams and fraud, an increase of 54 complaints from the previous year. Market misconduct complaints rose by more than 100, to 322. In total, complaints against intermediaries and market activities were up by 357 compared to the 2016-2017 report period. 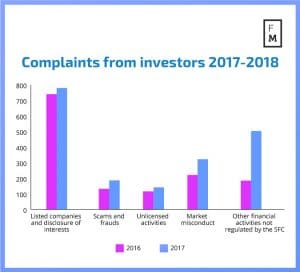 Following the complaints, the SFC took disciplinary action against 31 licensed corporations and individuals which resulted in a total of $483 million in fines.

As a result, the annual report states: “our surveillance of untoward price and turnover movements resulted in 8,461 requests for trading and account records from intermediaries. We also received and assessed 172 notifications from intermediaries regarding suspicious equity and derivative trading. The number of market surveillance cases rose 16% year-on-year.”

HSBC Private Bank (Suisse) SA was highlighted in the report, as the bank was a fined a record $400 million. The fine was a result of the regulator’s disciplinary action against the bank’s material systemic failures in the sale of structured products in the run-up to the global financial crisis in 2008. This was then upheld by the Securities and Futures Appeals Tribunal.

The annual report of the SFC summarises and provides key statistics on the regulators work during the year. It also highlights its ongoing initiatives to promote healthy and sustainable market development.

Commenting on the report, Carlson Tong, the SFC’s Chairman said: “As markets become increasingly complex and interconnected, it is crucial that we press ahead with initiatives to advance Hong Kong’s position as an international financial centre whilst ensuring investor protection.”

The SFC’s Chief Executive Officer, Ashley Alder, also added: “We are moving forward with our front-loaded regulatory approach to tackle market misconduct and other irregularities with earlier and more targeted intervention.

“This allows us to get ahead of threats to market integrity, safety and quality, whilst also focusing our enforcement efforts on areas posing the greatest risks to investors and our markets.”

It is not surprising that the number of complaints against scams and unlicensed activities increased in 2017. Scams, clone companies, and unlicensed brokers operating without authorization are becoming increasingly common and local regulators across the globe are constantly issuing warnings to investors.

The SFC itself has issued many warnings against such operations and only on Monday, Italy’s Commissione Nazionale per la Societá e la Borsa (CONSOB) blacklisted four unregulated brokers.